There are many resources available in Special Collections for genealogical research of the local area.  Those listed here are some of the more common and useful when getting started.

County, town and village histories are a good source for genealogical research.  They often list many names and families of people who settled the area, owned businesses, worked in the industries and served in the military.

One of the main sources of genealogical information are the census records.  Special Collections houses Federal Census indexes for New York State from 1800-1860.

Feinberg Library has Federal Census on microfilm for New York State from 1790-1930.  The earlier dates contain the entire state with later years only having The northeastern counties.

Historical newspapers can hold a wealth of information for genealogists. They are valuable because of the numerous of the articles that include information about individuals and families. Historical newspaper articles reveal information about people that may not be otherwise recorded. Some information that may be found include articles about births, marriages, deaths, obituaries, social events, sporting events, church activities and affiliations, occupations, legal notices, land sales, taxation, military service, businesses, and advertisements. Local newspapers may also contain stories that include details about families that may not be found in any other source.

Many of the local newspapers from the area have been digitized by the Northern New York Library Network and can be accessed online through New York Heritage.  These include full-text indexing of the newspapers which makes them keyword searchable.

Feinberg Library also houses these newspapers along with others on microfilm.

Many records from Clinton County Catholic churches have been transcribed and are available in Special Collections.  These include baptism, marriage and deaths recorded by the church.  Often times these are the only vital records available since New York State didn't require the keeping of these records until 1880.

Cemetery records are also a very good source of information.  As with church records, information on the gravestones will pre-date the New York State Vital Records Law.  Along with birth and death dates listed, many times family relationships are also noted.

These records were compiled by Hugh, Charles W. and Hulda McLellan from the 1920's into the 1960's.  They are a record of burials in Clinton and Essex Counties along with some in Quebec Province, Canada.  All of the information that was available on the gravestone was recorded. 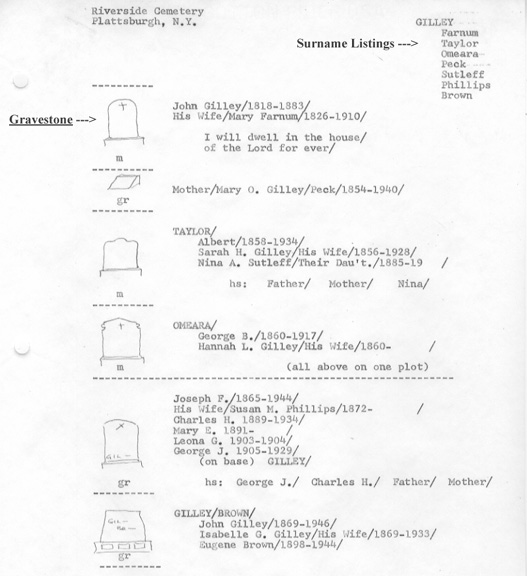 Here is a quick reference on how to find the materials listed here in Special Collections: