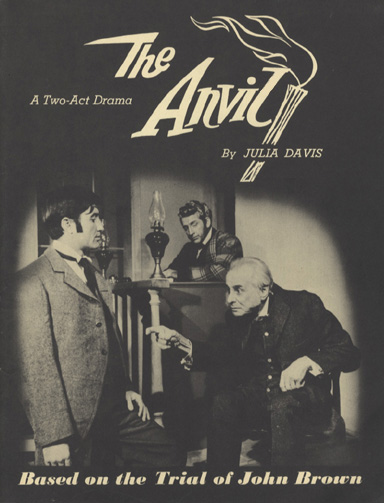 The Anvil: The Trial of John Brown

"The Anvil is a re-enactment of the trial of John Brown, the Abolitionist, taken from the actual records of the trial itself.  Although the proceedings of six days have been condensed into conventional playing time, you will hear nothing said in the courtroom which was not then said.  A few scenes in John Brown's cell have been added to fill out the picture; but they too are authentic, for they were taken either from his letters or from accounts of eye-witnesses."

"It is not the intention of this play to pass judgment on John Brown.  Here we try to let him speak for himself, to show him as he was.  Even today some consider him a saint and a martyr; some think him a fanatic and a sadist.  He vigorously rejected a plea of madness which his lawyers tried to introduce,  he stated repeatedly that he was willing to give his life in order to advance the cause of freeing the slaves.  Right or wrong, he should be played with nobility, and the respect due a man willing to sacrifice his life for an idea."