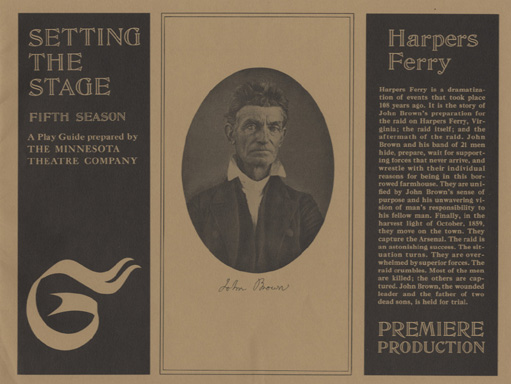 "Harpers Ferry is a dramatization of events that took place 108 years ago. It is the story of John Brown's preparation for the raid on Harpers Ferry, Virginia; the raid itself; and the aftermath of the raid. John Brown and his band of 21 men hide, prepare, wait for supporting forces that never arrive, and wrestle with their individual reasons for being in this borrowed farmhouse."

"They are unified by John Brown's sense of purpose and his unwavering vision of man's responsibility to his fellow man. Finally, in the harvest light of October, 1859, they move on the town. They capture the Arsenal. The raid is an astonishing success. The situation turns. They are overwhelmed by superior forces. The raid crumbles. Most of the men are killed; the others are captured. John Brown, the wounded leader and the father of two dead sons, is held for trial."