The Drama about Frederick Douglas, John Brown, and Revolution 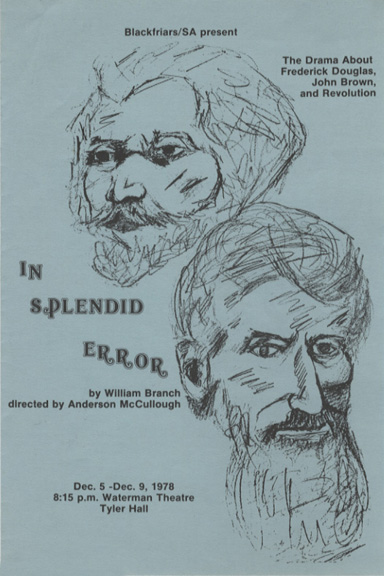 "Premiered in October 1954 in the Greenwich Mews, an off-Broadway theater, In Splendid Error did not receive the notice it should have. Too many people, a number of reviewers included-among them the learned and greatly respected Brooks Atkinson  of the New York Times- had never even heard of Frederick Douglas. 1 And armed with this gap in their educators, some of the reviewers went forth and questioned whether the "playwright was over- romanticizing in 'creating' such a figure."2   He had seen the play in 1954, I would have known about Frederick Douglass. But such good fortune would not have been because of my high school and college educational experiences. For, during my years in school, I never saw the name of Frederick Douglass mentioned in any of the history texts that we were assigned. And though my teachers did mention another orator, Booker T. Washington, and a scientist George Washington Carver, it was only through the words of my grandfathers and the words of my father, who incidentally is named after Frederick Douglass, that I initially came to know of this great man. I was not so fortunate where other black heroes were concerned, but I did at least know of this escaped slave who lived in Rochester, New York, worked in the underground railroad, and became a famous publisher and orator."

"On the other hand, because the free soil battles in Kansas and Harper's Ferry were noted in all my history texts- an indication to me that almost all writers of American history recorded these events- most people knew of John Brown. Hollywood even helped in this educational venture by putting out several movies dealing, in part, with this revolutionary. The most effective treatment in film occurred for men when Raymond Massey played John Brown in a movie entitled Seven Angry Men which was released in 1955."

"As far as I know, the story of Frederick Douglas has not been treated in film for distribution to the movie theaters. On television, however, one of the episodes of the series based on John F. Kennedy's Profiles in Courage did deal with Frederick Douglass; but in terms for that medium, I know of no other such examples. And because of this sparse treatment, even though the climate has somewhat changed today and black heroes are being noted in many of our history textbooks, I would wager that Frederick Douglass is still not known to a majority of Americans. (This impression was reinforced by conversations with some of my colleagues here at SUC- Oswego and other members of the community.) And since that would seem certainly be foreign to that same number. One of my colleagues in confessing that he had never heard of Frederick Douglass bemoaned that many gaps in his education were black heroes are concerned. For those who already know of Frederick Douglass, we offer a powerful historical drama with very warm and caring human beings. And for those to whom Frederick Douglass is someone new we offer not only a strong drama but also a bit of information with which to begin to close one of those educational gaps."