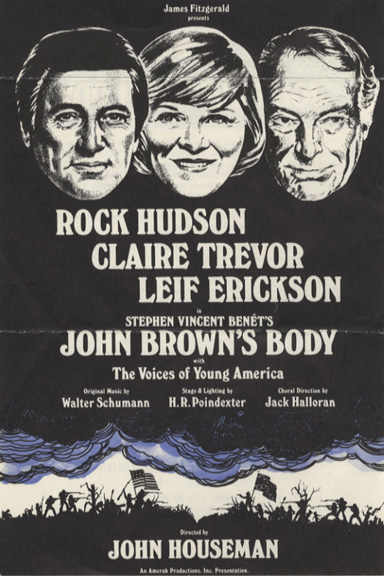 "The panorama of events and emotions of the Civil War that Stephen Vincent Benet captured in his Pulitzer Prize winning epic poem, "John Brown's Body", have been brought to the stage in a powerful play with music- preformed by three of the country's most notable actors, Rock Hudson, Claire Trevor, and Lief Erickson. Through them, the audience experiences the loves and torments of the memorable characters on both sides of the terrible war between the states. The "fourth actor" in the drama, the Voices of Young America, is a chorus of sixteen voices which, with Walter Schumann's brilliant score, recreates the sounds of the war, of whole towns, of the clamor of war, of the scenes of triumph and loss."

"The production, so appropriate to this years' Bi-Centennial celebration is the first to be toured nationally by a star-studded professional company since the original which played some seventy cities, including New York where it earned the Drama's Critic's Award in 1954. The stars then were Tyrone Power, Judith Anderson and Raymond Massey, who were directed by Charles Laughton, who had also adapted the Benet work for the stage. The mush honored director (and Academy Award winning actor) John Houseman his staged this Amerak production with an equally awesome company of actors."

"John Brown's Body" will be the first dramatic role on stage for Rock Hudson, long one of the screen's most popular performers in both comedy and drama (and an Academy Award nominee in "Giant"). He has completed five seasons in television's "McMillian and Wife" and his most recently appeared in England and Canada in the musical "I Do, I Do". Claire Trevor, whose memorable screen roles include three Academy Award nominations and an Oscar for her role in "Key Largo", and Lief Erickson whose film career has been matched by outstanding appearances on stage, including his memorable performance on both stance and screen in "Tea and Sympathy", are teamed with Mr. Hudson in the demanding leading roles."

"Award winning H.R. Poindexter has created the setting and the lighting for "John Brown's Body" whose choral director is the noted Jack Halloran."