After Brown was captured at Harper's Ferry on October 18, 1859 he and his surviving raiders were brought under heavy guard to the Charlestown jail.

A decision was made to try the conspirators immediately and on October 25th they were arraigned at the Jefferson County courthouse. 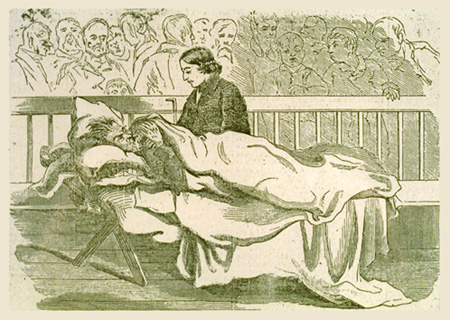 The Prisoner Brown and His Boston Counsel, Mr. Hoyt

Browns trial began on October 27th and lasted till the 31st.  After only 45 minutes of deliberation by the jury  he was found guilty of treason, and conspiring and advising with slaves and others to rebel, and murder in the first degree.

On November 2nd the judge sentenced John Brown to be hung on December 2, 1859.  On the same day of his sentencing other conspirators, Coppoc, Copeland, Green and Stevens were tried and found guilty.  They were also sentenced to death and were hung on December 16, 1859.

After being convicted of treason, murder and conspiring with slaves to rebel, John Brown was executed on December 2, 1859.  On that day prior to his execution he gave the following message to one of his guards "I, John Brown, am now quite certain that the crime of this guilty land will never be purged away but with blood.  I have as I now think: vainly flattered myself that without very much bloodshed; it might be done." 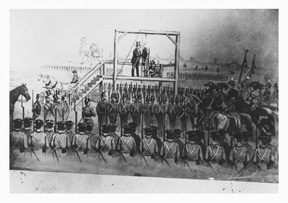 He was then moved to his hometown of North Elba, New York where he received a quiet burial with family and friends. 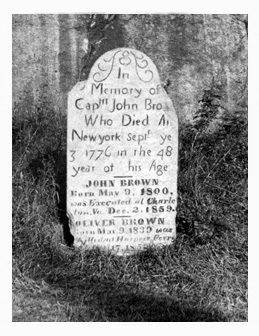 Other members of his raid who were killed during the raid or hanged on December 16th were buried in a common grave at Harper's Ferry and were later reburied in 1899 near John Brown in North Elba. 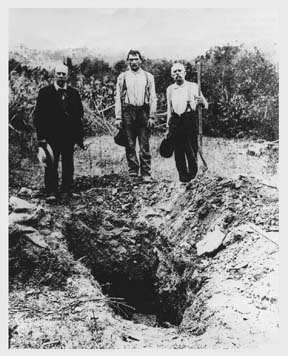 Opening of grave of John Brown's men at Harper's Ferry