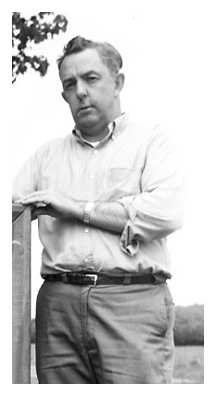 Edwin N. Cotter Jr. was born in the Bronx on July 16, 1930 to Martha Fitzpatrick and Edwin Sr. He studied briefly at Cobleskill Agricultural College, earning his associates degree, and then joined the United States Navy and served in the Korean conflict. For thirty-two years (1964-1996) he served as superintendent of the John Brown Farm and State Historic Site in Lake Placid, New York. He also served as president of various associations including the Lake Placid Historical Society and the John Brown Memorial Association. He raised three daughters with his wife Alice Jaeger, and died in Lake Placid on August 23, 2001.

Few could have guessed that Cotter would dedicate his life to the study of John Brown history, becoming a self-made scholar and redefining the significance of the historical grounds at North Elba, beyond what any of the previous superintendents had done. During his tenure at the John Brown Farm and State Historic Site, Cotter amassed an extensive collection of materials relating to John Brown, and others who made their mark at Harper's Ferry. Some features of the collection include original correspondence between Mr. Cotter and his business partners, other John Brown historians (most notably with Dr. Gee), and letters written by John and Mary (2nd wife) Brown to his family, friends, neighbors and business associates.  Deeds and records pertaining to the land grants at Timbuctoo that were intended to be used to form a Black community in the Lake Placid area. Other materials housed in the collection include genealogical records tracing the John Brown family and newspaper clippings concerning the visit of the John Brown descendants to the farm in the 1990's.

In 2002 Edwin Cotter's research material on John Brown was donated to SUNY Plattsburgh's Special Collections.  To view a listing of materials included in the Edwin N. Cotter Jr. Collection use the following link: